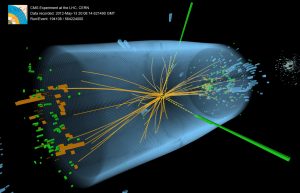 There was a bump in the middle of the night.

On June 14, 2012, Physics and Astronomy Professor Andrei Gritsan analyzed data in a small meeting room at the CERN in Switzerland. He worked alongside his graduate student, his postdoctoral fellow, and a dozen particle physicists from around the world. Staring at their laptop screens, they were searching for the elusive Higgs boson.

For years, researchers had smashed protons, one of the components of atoms, at phenomenal speeds and observed new particles created in the process. This occurs naturally in space when energetic cosmic ray particles collide. The Large Hadron Collider (LHC), the world’s largest particle accelerator, re-creates these events here on Earth.

Gritsan’s team plotted graphs of the predicted data based on their model. That day, when they compared their plots to the experimental data from the collisions, they noticed a small deviation from the smooth curve predicted by theory. They found an unexpected bump in the curve.

Realizing the significance of this discovery, Gritsan delayed his return to Baltimore. His team was one of several groups sifting through the data from the collisions, analyzing the results using different methods, and the findings needed to be confirmed by all groups. Three weeks later, on July 4, 2012, amidst a media circus, the research teams jointly announced they had detected the Higgs boson.

This was the missing piece of the Standard Model of particle physics that describes the array of fundamental particles that make up everything (indeed, combined together they make up atoms), as well as the forces that guide their interactions.

Fifteen months later, Peter Higgs and François Englert, two of the theorists who had predicted the existence of the Higgs boson in the 1960s were awarded a Nobel Prize.

While doing so 10 years ago was a momentous achievement, today researchers routinely create the Higgs bosons in the collider. Gritsan’s team has shifted the focus of their study from detecting the particle to measuring the Higgs’s properties to incredible accuracy.

“You tickle it, and you see how it giggles,” explains Savvas Kyriacou, a post-doctoral fellow in Gritsan’s team.

Making these precision measurements requires considerable backend work to align the 16,000 sensors that detect and tract the more than one billion proton collisions per second that take place inside the LHC. “You can think of it as focusing a telescope,” explains Gritsan.

Once the detector is properly calibrated, Gritsan and his team use it to characterize the Higgs boson’s mass, lifetime, and decay to other particles.

For reasons best explained by quantum mechanics, when a Higgs particle is created, it can adopt one of a range of masses.

“Something very important to understand is that the collider is like a huge slot machine,” says Kyriacou, alluding to the fact that the quantum world is probabilistic, not deterministic like our own. Events and properties have a probability of occurring, but they are not set.

One Higgs boson can have a mass of 125 GeV/c2 (the most common mass for a Higgs), others may have a mass that is a bit lower or higher, and on rare occasions, a Higgs boson is created that has a mass twice that size. When researchers plot the number of Higgs particles they detect at different masses, they see a curve showing the range of masses, not a single point.

Due to the level of precision required in the measurements, Gritsan’s team is one of the few to have attempted it.

Indeed, the lifetime is pretty short. On the order of 10-22 seconds. “Even if the Higgs boson travels close to the speed of light, the distance it will travel over its lifetime is smaller than the size of an atom,” explains Gritsan.

Nearly as soon as it is created, the Higgs boson disintegrates. So why is knowing the lifetime of something so ephemeral important?

The Standard Model makes predictions about what the Higgs boson can decay into. But, “what if there are some unknown particles that it can decay to?,” asks Gritsan. If a particle has more avenues to decay than known through the Standard Model, its lifetime will be shorter than predicted. “Measuring the lifetime of the Higgs is an indirect way to get evidence that it decays to something unknown,” says Gritsan.

After 10 years of investigation, “we didn’t make any discovery that show deviation from the Standard Model,” says Kyriacou.

And that’s a good thing. It means our understanding of the building blocks of the Universe are fundamentally accurate. Jeffrey Roskes, who completed his PhD under Gritsan’s supervision and is now an assistant research scientist in another group at Hopkins puts it this way. “The Standard Model is a really good theory. I don’t mean that in the sense that it is beautiful, although it is that. But it makes very precise predictions, and those predictions have been confirmed to a ridiculous degree of precision. There are certain measurements that are confirmed up to 7 or 8 decimal places, exactly as the Standard Model predicted. That is unbelievable.”

“But there are also certain parts that have holes in it,” acknowledges Roskes.

“It can not say anything about dark matter, dark energy, or the acceleration of the Universe,” adds Kyriacou. “And since these are observable – it’s not something that somebody said ‘oh this is happening’ – we have very strong evidence for all these things, we know that the Standard Model needs to be expanded.”

“The Higgs boson appears to be a tool which can help us to look further,” asserts Gritsan. In a sense, the Higgs boson is transitioning from being the object of study, to becoming a tool to probe the laws of nature that were hitherto inaccessible to us.

“It’s not just that the Higgs is a new tool,” says Roskes, “it’s also a versatile tool, because it interacts – or at least is expected to interact – with every other particle that has mass.”

One of the hopes is that it will unlock new ways of studying dark matter. This substance is thought to make up 85% of the matter in the Universe. It’s invisible, but we know it has mass because of the way it affects galaxy rotations. “We have no idea what it’s made of, but it’s probably some sort of particle,” says Roskes. “If there’s a dark matter particle that has mass, we would expect the Higgs boson to interact with it.”

Dark matter, dark energy, the imbalance of matter and antimatter in the Universe. None of these things are explained by the Standard Model, but the Higgs has ways to probe them. We are entering a new age of particle physics, one in which the past decade of tickling the Higgs particle and watching how it giggles is about to pay off.

“We had a guiding light, the Standard Model, which told us more or less what to expect,” says Kyriacou. “Now we are walking in the dark. It’s like a whole new continent, and you don’t have a map, or even fairy tales or myths about it. Nobody knows what to expect, but that’s when exciting things happen…”

July 4th, 2022, marks the 10 year anniversary of the announcement of the discovery of the Higgs boson. To celebrate this landmark, Dr. Andrei Gritsan and his collaborators explain the significance and impact of this discovery, and the research that has taken place since then, in an article published in the prestigious journal Nature. A second paper focussing on the works from Gritsan’s team, and specifically on the Higgs boson lifetime, will appear in Nature Physics later this week.