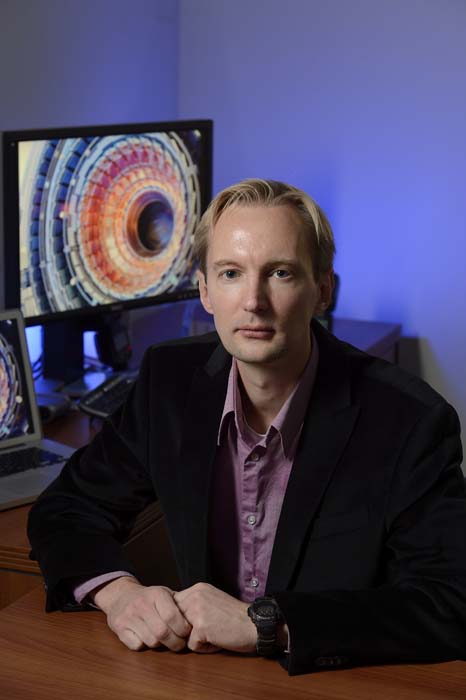 PhD, University of Colorado at Boulder

Andrei Gritsan received his PhD in 2000 from the University of Colorado at Boulder. His primary research interests are in experimental particle physics. He is a member of a team of researchers at the Large Hadron Collider, who, in 2012, announced the discovery of a new subatomic particle, a Higgs boson.

Prof. Gritsan's research is focussed on the observation and study of the new form of matter-energy, such as the Higgs boson, celebrating the 10 year anniversary of the discovery just recently [reference *]. In Run-1 of the Large Hadron Collider (2008-2014), together with his colleagues on the CMS experiment, he worked on the Higgs boson discovery [*], study of its spin-parity quantum numbers [*, *], measurement of its production mechanism and deeper understanding of its properties [*], constraints on the H boson width [*, *] and lifetime [*], comprehensive study of the H boson quantum numbers and anomalous interactions [*, *]. With Run-2 of LHC (2015-2021), together with his colleagues, he worked on the first joint analysis of on-shell production and decay of the H boson within the Effective Field Theory (EFT) framework [*, *, *, *], on the first joint EFT analysis of on-shell and off-shell H boson production [*, *], on the first measurement of the CP structure of the Yukawa interaction between the H boson and top quark [*], and on the detailed studies of the H boson properties [*, *, *]. With the start of Run-3 of LHC (2022-present), Prof. Gritsan and his team will go a lot deeper into understanding the H boson properties and into a search for the unknown.

All the above measurements point to the property of vacuum, which is filled with the all-penetrating Higgs field, where the H boson is simply its excitation created in the laboratory (see also Nobel Prize Physics-2013). Our past, present, and future depend on the properties of this field, and we are still to understand all the implications of this grand discovery and to study in detail this new form of matter-energy never known before. However, it is likely that the discovered H boson is just a tip of an iceberg of new states of matter-energy, or it may become the window for us to reach beyond our present knowledge of matter-energy. The undiscovered symmetries of nature which unify the fundamental forces and particles, the puzzle of dark matter and energy, and the apparent lack of antimatter in our Universe, all these mysteries point to something new that could be uncovered through the studies of the H boson. Prof. Gritsan's team pursues both direct searches [*, *, *, *] for new states and indirect constraints through precision measurements of the known states, such as the H boson and Z boson [*, *, *].

Prof. Gritsan works across boundaries of experimental and theoretical development. He engaged with a group of experts in development of new methods for analysis and interpretation of the data, which are known as MELA technique and JHU generator [*, *, *, *, *, *] for the angular, kinematic, and statistical analysis of the decay products and associated particles of the H boson. Read more about this effort. He has been an active member of the LHC Higgs Physics Working Group, where he has been a member of the Steering Committee, and he has been one of the founding conveners of the LHC Effective Field Theory Working Group. Here is a contributor to the Particle Data Group. He is deeply interested in the Higgs physics and other developments in particles physics and participates in the Snowmass-2001, 2013, 2022 activities to shape future directions in the field.

Prior to LHC, direct access to new fundamental particles (such as the Higgs boson or new states) was beyond the energy reach of operating accelerators. Gritsan worked with the heavy flavor quarks, such as the "beauty" or b quark, which were produced in electron-positron annihilations at the BABAR and CLEO experiments. He was looking for new ways to search for new fundamental particles that could exist briefly as heavy virtual states in the decays of b quarks. The Heisenberg uncertainty principle in quantum physics allows such non-trivial effects, called "penguin" loops, to occur for short instants. On CLEO, he discovered [*, *] this process as part of his Ph.D. research. It was the first observation of the gluonic penguin transition b->s+gluon. On the BABAR experiment, he discovered [*, *] a surprisingly large transverse polarization of the vector mesons produced in a penguin decay, which contradicted all expectations and may become evidence for new particles and interactions, and took this approach of angular analysis to a new level [*, *, *], see also review article.

Another important aspect of heavy quark decays is that they include the only known example of Charge-Parity (CP) reversal symmetry violation, which is equivalent to Time-reversal symmetry violation and which follows from the Cabibbo-Kobayashi-Maskawa (CKM) quark-mixing model (see also Nobel Prize Physics-2008). CP violation is necessary to produce our matter-dominated Universe and has important cosmological consequences. The Standard Model mechanism that leads to CP violation is represented graphically by the so-called "Unitarity Triangle." On the BABAR experiment, Gritsan discovered the B decays to two rho mesons, showing that an analysis of this system could determine one of the angles alpha of the "Triangle" precisely by constraining penguin effects [*, *, *]. This work of Prof. Gritsan, along with his significant contributions to the discovery and to the characterization of the Higgs Boson, were recognized by the American Physical Society Fellowship.

Prof. Gritsan is also an expert on various aspects of high-energy physics detectors, such as silicon tracking detectors, electromagnetic calorimeters, tracking drift chambers, triggers. He had been leading the tracking and silicon detector alignment groups at the BARAR and CMS experiments [*, *]. An essential element of the LHC program is the alignment of thousands of silicon detectors that track the particles' paths which must be understood to micron precision. Prof. Gritsan led the CMS team to successful commissioning of its silicon tracker alignment at the time of data-taking startup [*] and was an editor of the [very first CMS publication]. This essential detector work continues through present day [*].

We communicate our research results to the public through outreach activities. We develop these activities through the QuarkNet program, annual Johns Hopkins Physics Fair, Science Festivals, and collaboration with the Maryland Science Center, as well as through hands-on demonstrations of elementary particles on the university site. There are exciting opportunities for graduate and undergraduate students to work in collaboration with experts to create new exhibits to communicate Particle Physics to the public. We also invite teachers and students from schools in Baltimore area to participate in these activities. Contact Prof. Gritsan and other faculty members for further information.

Read an article “ Hadron collisions reach out to people in Washington” in CMS Times.

The Science and Engineering Festival

We have developed an exhibit devoted to the Large Hadron Collider which was shown in Washington DC during the Science and Engineering Festivals in October 2010, April 2012, April 2014, April 2016, and April 2018. We were preparing for the next Festivals in 2020 and 2022, but it has been postponed due to COVID-19. This exhibit highlights the particle physics and the LHC results in particular. Graduate and undergraduate students work with Prof. Gritsan on exhibit development. Read more in the CMS Times article and check these slides. We invite student volunteers to help with development and/or presentation of the exhibit, contact Prof. Gritsan for further information.

The Johns Hopkins Physics Fair attracts several hundred visitors from Baltimore area each Spring. We provide continuous physics demonstrations, prepare science exhibits (see more on the Science Festival exhibit below) and conduct competitions for local high school students. This became a popular event on JHU campus and we invite everybody to participate in the next Physics Fair in the Spring.

The Johns Hopkins University is hosting a QuarkNet center, where the high school teachers are involved in summer research in particle physics. Here are examples of the lectures given (usually in the morning) during the week courses in July-August of the past several years:
Quantum Physics (2022)
Understanding the emptiness: the Higgs field and beyond (2021)
A Virtual Trip to ICHEP-2020: the Science Festival and the Higgs Boson (2020)
Possible Future Collider Experiments in Particle Physics (2019)
Connecting the Standard Models of Particle Physics and Cosmology (2018)
Study of the Higgs Field (2017)
Hunting for elusive particles at LHC: Start of Run II (2016)
Matter in Space and Time: What Do We Know? (2015)
What is the Higgs Boson and why do some call it the ‘God Particle’ (2014)
Science of the Nuclear Energy (2013)
A Discovery in the Hunt for the Elusive Higgs Boson (2012)
Status of LHC and the Higgs search (2011)
Space-time (2010)
The Higgs Particle, or the Origin of Mass (2009)
What If the Particle World Were Different? (2008)
The Uncertainty Principle and the Quarks (2007)
Matter and Anti-Matter: What is the Matter with Them? (2006)


We also offer hands-on experience with the following table-top experiments related to particles physics. One afternoon is usually enough to perform an experiment (sometimes data could be collected overnight) and up to five experiments could be performed in one week:
1. Muon lifetime
2. Photo-electric effect
3. Pulsed NMR
4. Franck-Hertz experiment
5. Nuclear spectroscopy
6. Rutherford scattering
7. Brownian motion
8. Hall effect

We have a hands-on demonstration of elementary particles in the Cloud Chamber. We also have an illustration with an array of scintillator counters which would register cosmic rays and would be integrated in the US-wide array of cosmic counters located in the high schools.

Information about the JHU Undergraduate School in Physics and Astronomy.

There are exciting opportunities for undergraduate students of all levels to participate in Experimental Particle Physics research. Contact Prof. Gritsan for further details. There is an option of conducting research for academic credit.

The projects are to learn and apply data analysis techniques on the CMS high-energy physics experiment on the Large Hadron Collider (LHC) or/and to develop outreach projects which communicate LHC results to the public. Technical aspects of the data analysis work involve modern computer applications in high energy physics. Some experience with modern computer languages and operating systems (e.g. UNIX/C++) is desired but not required. See discussion of the projects for the graduate students.

Information about the JHU Graduate School in Physics and Astronomy.

An overview of research activities is given here. Learn physics analysis techniques in frontier particle physics and work with silicon tracking detectors.

Get involved in analysis of the CMS data studying the properties of a new discovered Higgs boson and/or search for new related phenomena. Perform Monte Carlo modeling and LHC data analysis in search for new fundamental particles and interactions. Also learn both hardware and software requirements on alignment of the silicon tracking detectors on the CMS experiment. Technical aspects of the work involve modern computer applications in high energy physics:

Some experience with some of the above items (UNIX/C++) is desired. Course in Elementary Particle Physics (171.408 / 171.625) is recommended but not required. You can read more about the CMS experiment.

Ph.D. JHU graduates who worked with Prof. Gritsan, and their thesis links:

Yanyan Gao (Ph.D. 2009, current as of 2022: Chancellor Fellow at the University of Edinburgh, equivalent to a tenure-track assistant professor in the US)
Study of rare gluonic penguin decays B to phi K pi (pi) at BABAR

Ian Anderson (Ph.D. 2015, current as of 2022: research in industry)
A Tale of Two Vertices: Production and Decay of the Higgs VV Vertex at the LHC

Chris Martin (Ph.D. 2015, current as of 2019: postdoctoral fellow at Ohio State University)
Discovery and Characterization of a Higgs boson using four-lepton events from the CMS experiment

Candice You (Ph.D. 2017, current as of 2019: research in industry)
Higgs boson properties and search for additional resonances

Yaofu Zhou (Ph.D. 2019, current as of 2020: visiting scholar at Missouri University of Science and Technology)
Probing Anomalous Couplings of the Higgs Boson to Weak Bosons and Fermions with Precision Calculations