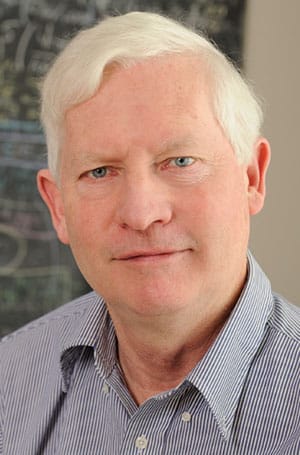 Timothy M. Heckman is the inaugural Dr. A. Hermann Pfund Professor and Chair of the Department of Physics & Astronomy. He received a BA magna cum laude from Harvard College and a PhD in astrophysics from the University of Washington. He then held a postdoctoral fellowship at the Leiden Observatory followed by the Bart Bok Fellowship at the Steward Observatory. In 1982, he joined the faculty in the astronomy program at the University of Maryland. He came to Hopkins in 1989, holding a joint appointment as a professor in the Department of Physics and Astronomy and tenured astronomer at the Space Telescope Science Institute. He became a full-time Hopkins faculty member in 1994 and became the department Chair in 2015.

Heckman is a member of the Board Committee on Physics and Astronomy of the National Academy of Sciences and serves as the Johns Hopkins representative on the Subaru Prime Focus Spectrograph Steering Committee. He served as chair of the Astrophysical Research Consortium (ARC) Board of Governors from 1995 through 2000 during which time ARC established the Sloan Digital Sky Survey. He has served as a member of the National Academy of Sciences decadal survey “New Worlds, New Horizons,” was the Vice Chair of the Board of the Association of Universities for Research in Astronomy, served on two Space Telescope Science Institute director search committees, and served on a search committee for the dean of the Krieger School of Arts and Sciences.

Heckman’s research has focused on the evolution of galaxies and supermassive black holes. He has authored or co-authored nearly 500 scholarly publications which have been cited nearly 75,000 times. He has given over 100 invited talks at national and international conferences and symposia. He has been elected to the American Academy of Arts & Sciences, and to the National Academy of Sciences, named by Thomas Reuters as a one of “The World’s Most Influential Scientific Minds,” was awarded an Alfred P. Sloan Fellowship, has been named a Sackler Distinguished Lecturer and a Sackler Distinguished Visitor, and has been elected an Overseas Fellow of Churchill College of the University of Cambridge.