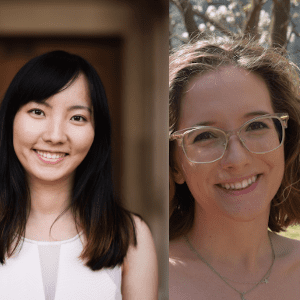 Graduate students Carrie Filion and Cicero Lu have been selected by NASA to receive Future Investigators in NASA Earth and Space Science and Technology (FINESST) graduate fellowships. The FINESST fellowships will cover funding for three years of research for Carrie and Cicero.

Carrie will use the funds to carry out her project titled, “The Low-Mass Stellar Initial Mass Function in the Earliest Galaxies,” she will use Hubble Space Telescope imaging of nearby, ultra-faint dwarf galaxies to constrain the mass distribution of the long-lived, low-mass stars in these dark-matter-dominated systems.

Cicero will apply the funding to her project titled “Sequencing Dusty Disk Spectra: A Non-Parametric, Systematic Analysis Revealing the Relationships Between Disks and their Host Stars.” Cicero will use  SpitzerSpace Telescope Infrared Spectrograph  observations of dusty disks around nearby, young stars (debris disks) to investigate (1) the commonality of crust-mantle formation in extrasolar, Earth-like planets and (2) relationships between disk architectures and their host star properties. Cicero will be advised by Astronomer Dr. Christine Chen of the Space Telescope Science Institute and Dr. Tushar Mittal of the MIT EAPS department.