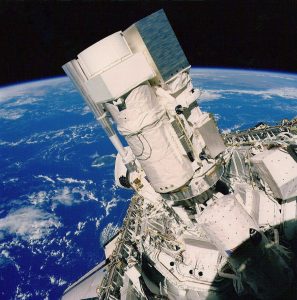 December 2-10, 2020, marks the 30th anniversary of the Astro-1 space shuttle mission (STS-35) aboard the orbiter Columbia. This mission carried the Astro Observatory into space for a dedicated ultraviolet astronomy mission, including the Hopkins Ultraviolet Telescope (HUT) for which JHU professor Arthur F. Davidsen was the Principal Investigator. HUT was a 0.9m telescope with a prime focus far ultraviolet spectrograph. The spectrograph itself is on display in the Bloomberg second floor lobby, but HUT is actually on display in the Smithsonian Air & Space Museum in Washington. Many of the scientists and engineers who “cut their teeth” on the HUT project at JHU have gone on to become key players in many other missions and space instruments, including Hubble and it servicing missions and the upcoming James Webb Space Telescope. Congratulations to all who participated in this landmark mission.

The Hopkins Ultraviolet Telescope Facebook page will be updated over the next week with anniversary materials.