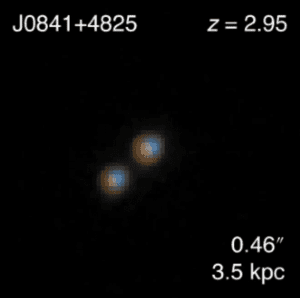 Graduate student Hsiang-Chih Hwang and Associate Professor Nadia Zakamska are part of the research team that has published an article in Nature Astronomy titled “A hidden population of high-redshift double quasars unveiled by astrometry.” The study presents the discovery of two supermassive black hole pairs in the early universe.

Professor Zakamska’s “Behind the Paper” article explains the science of the study concisely.

A very exciting aspect of this discovery is that it’s based on the technique developed by Hsiang-Chih Hwang, and he was also the Principal Investigator of the successful Hubble Space Telescope proposal which confirmed the candidates for the study as dual supermassive black holes.