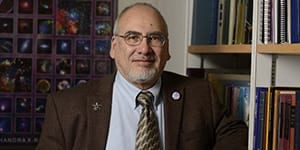 Four Johns Hopkins University researchers are among the 388 new fellows elected to the American Association for the Advancement of Science.

The School of Arts and Sciences honoree is Stephen Murray, of the Department of Physics and Astronomy. Murray, who conducts research in high-energy astrophysics and X-ray astronomy, was elected for contributions to high-resolution X-ray imaging spectroscopy, and for founding the NASA Astrophysics Data System that has transformed the way we access information. The data system, used by virtually all astronomers and astrophysicists worldwide, has provided free access to the published literature in their field.

AAAS fellows are elected by their peers and honored for their scientifically or socially distinguished efforts to advance science or its applications. The newly elected fellows will be awarded a certificate and a rosette pin during the AAAS Fellows Forum at the 2014 AAAS annual meeting in Chicago on Saturday, Feb. 15.