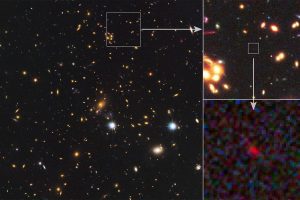 Discovery of a small, faint galaxy opens window into deepest, most remote epochs of cosmic history. With the combined power of NASA’s Spitzer and Hubble space telescopes as well as a cosmic magnification effect, a team of astronomers led by Wei Zheng of The Johns Hopkins University has spotted what could be the most distant galaxy ever seen. Light of the young galaxy captured by the orbiting observatories shone forth when the 13.7-billion-year-old universe was just 500 million years old. Read full article