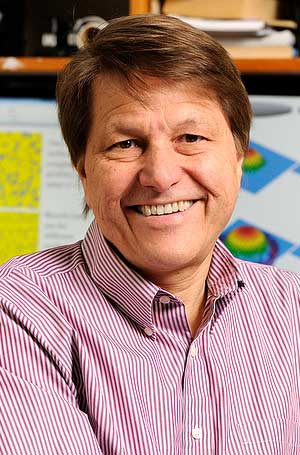 Mark Robbins grew up near Boston and received his BA and MA degrees from Harvard University. He spent a year as a Churchill Fellow at Cambridge University and received his PhD from University of California, Berkeley, in 1983. Following a postdoctoral fellowship at Exxon's Corporate Research Science Laboratory in New Jersey, he joined the Department of Physics and Astronomy at Johns Hopkins in 1986. He was promoted to associate professor in 1988 and to professor in 1992.

Robbins received a Presidential Young Investigator Award in 1986, a Sloan Foundation Fellowship in 1987, and a Simons Fellowship in Theoretical Physics in 2012 and 2019. He became a fellow of the American Physical Society (APS) in 2000 and the American Association for the Advancement of Science (AAAS) in 2018. He served as chair of the APS Group on Statistical and Nonlinear Physics and of the advisory board of the Kavli Institute of Theoretical Physics (KITP) at the University of California, Santa Barbara, and is on the advisory board of the Boulder School for Condensed Matter and Materials Physics. He has organized symposia and workshops for the Materials Research Society, the Aspen Center for Theoretical Physics, and KITP, most recently “From the Atomic to the Tectonic: Friction Fracture and Earthquake Physics in 2005 and “Physical Principles of Multiscale Modeling, Analysis and Simulation in Soft Condensed Matter” in 2012. He chaired the 2010 Gordon Research Conference on Tribology.

One of the cross-cutting themes in condensed matter physics is that simple interactions between particles lead to complex behavior when many particles are combined together. Many of the research projects in the group address examples of this emergent behavior. Studies of contact and friction examine why you can’t climb walls like Spiderman and how macroscopic friction laws emerge from contact between rough surfaces and molecular interlocking at nanometer scales. Studies of polymers explain why adhesives are thousands of times harder to break than thermodynamic estimates, why entropic forces appear to describe polymer mechanics at zero temperature, how polymers weld in manufacturing and 3D printing, and why virus capsids seem to deform like springs, what leads to power law distributions of avalanches in magnetic domain wall motion and along earthquake faults, how continuum mechanics breaks down at atomic scales and what new physics becomes important at the nanoscale.

Talks on these research areas are available here: markrobbins.johnshopkins.edu/talks.htm