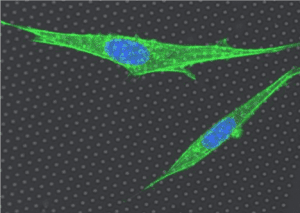 Graduate student Yu Shi is the lead author of a paper published in the Proceedings of the National Academy of Sciences that examines cellular dynamics using micropost arrays. The ability of animal cells to crawl, change their shape, and respond to applied force is due to their cytoskeleton: a dynamic, cross-linked network of actin protein filaments and myosin motors. Shi, along with Prof. Daniel Reich and two co-authors from the University of Pennsylvania created a method to measure cytoskeletal motion, forces, and rheology with high precision and statistical power, using substrates containing arrays of flexible microscopic posts. The team’s results show that motion of the cytoskeletal network is dominated by rare large events, and imply that future models of cytoskeletal dynamics may need to incorporate the concepts of jamming, self-organization and mechanical marginality, phenomena similar to those seen in avalanches and earthquakes.