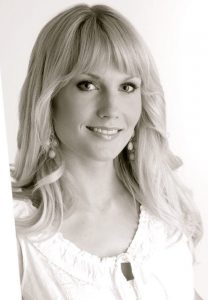 “I am very honored and grateful to have been awarded with the Akbari-Mack fellowship” said Wylezalek, “[the fellowship] will make a major contribution towards my research on the impact of supermassive black holes on their host galaxies and their role in galaxy evolution. It will also greatly facilitate collaboration with my international colleagues and I am delighted to receive this support.“

Wylezalek arrived at Johns Hopkins in October 2014 as a member of Prof. Nadia Zakamska’s research group. Her research focus is on supermassive black holes in the centers of galaxies, and the influence those black holes have on galaxy formation. Wylezalek is analyzing observations from the Gemini observatory and the Hubble Space Telescope that will allow her to measure the galaxy-wide impact of actively accreting black holes.

Wylezalek earned her Bachelor of Science degree in Physics from the University of Heidelberg in 2010. From there she moved to the University of Cambridge where she completed a Master of Science degree in 2011. Dominika was then awarded an international Max Planck graduate fellowship in Astrophysics and embarked on her Ph.D. studies at the European Southern Observatory near Munich, Germany.